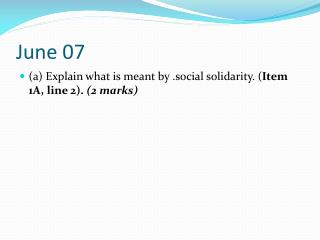 June 07. (a) Explain what is meant by .social solidarity. ( Item 1A, line 2). (2 marks) . Ans. Two marks for an appropriate explanation or definition, such as: individual members in society feeling part of a wider community, a sense of belonging etc.

Wed. June 4 Announcements: - . ch 16 test retakes: take by friday at latest! less than 65% see me to review your original