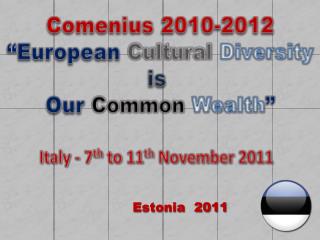 Cultural Diversity - . understanding:. understand that beginning a “new life” was and still is a struggle for many

Comenius 2010 – 2012 - . gymnázium rumburk czech republic. our mobilities …. in the comenius programme we should

HEALTH IS OUR WEALTH - . our ability to reproduce health or how to use the program of the institute for prevention and

Cultural Diversity - . what is cultural

cultural diversity - . research history #1. attempting to fit in the round hole: researching diverse sites and speeches,