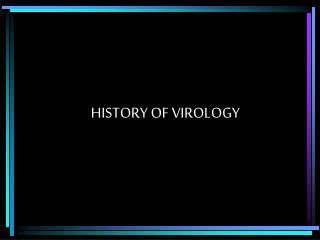 HISTORY OF VIROLOGY. 4 Billion Years Ago. On the primeval Earth, the surface of the planet is just cooling and beginning to harden into a crust. Rain forms pools containing many organic molecules and the first simple life forms appear.

CHAPTER 9 Essentials of Virology - . virus and virion  general properties of