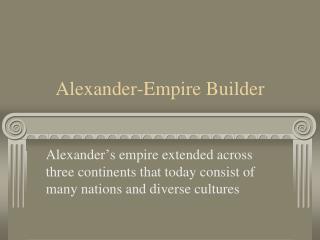 Alexander-Empire Builder. Alexander ’ s empire extended across three continents that today consist of many nations and diverse cultures. Why it Matters Now. Did Alexander the Great create history, or was he just carried on by the tide of events which were already occurring?. The rise to power.