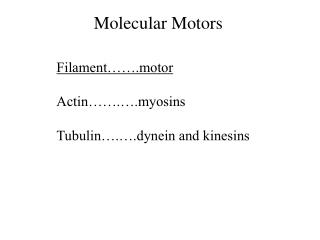 DC Motors - . construction very similar to a dc generator the dc machine can operate bath as a generator and a motor.

The Physics of Molecular Motors - . fluctuations in small engines … and the ii law of thermodynamics noise

Switched Reluctance Motors - . introduction. the switched reluctance motor (srm) is an electric motor in which torque is