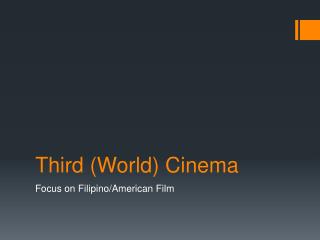 Third World Countries - . by emma, lauren and amy. why some countries have no

Third Year Personalisation - . preparation for your interview. my world of work-

Development Theory: Third World Perspectives - . “a culture cannot survive if it attempts to be exclusive.” mahatma

THIRD PARTIES - . in the past. third parties had been centralized in issues free soil party prohibitionist party the