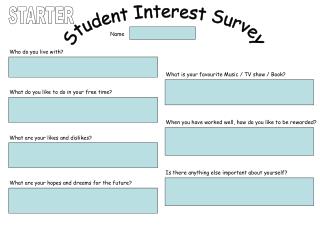 STARTER. Student Interest Survey. Name . Who do you live with?. What is your favourite Music / TV show / Book?. What do you like to do in your free time? . When you have worked well, how do you like to be rewarded? . What are your likes and dislikes? . Social Media? #WTF - What is social media and why is it important for marketing and advertising? in this presentation, i

Hyponatremia - . why hyponatremia important ?. common electrolyte abnormality- inpatient and outpatient up to 15 % of

Deb Pickering at Oakland Schools March 2012 Am I Interested? Is this important? - . model of attention and engagement.

State Leadership Conference - . shelly trent, sphr. what do i need to know?. important dates how are we governed? how are

This is Important: Before we get started, could you please… - . if you have a few minutes before we begin, prepare a

Space - . part one. the origin and evolution of the universe. what do we know about space?. what is it? where is it ?

DON’T MAKE ME THINK - . steve krug. what is the most important thing i should do if i want to make sure my web site is

Randomization: Too Important to Gamble with - . a presentation for the delaware chapter of the asa oct 18, 2012. dennis

What is Indicator 14 and why is it important? - . dawn a. rowe, npso coordinator rhode island advanced transition