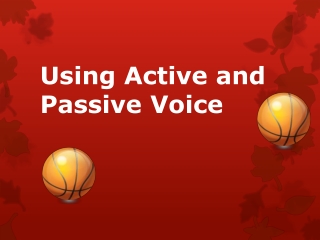 Using Active and Passive Voice. Would you rather?. Watch Lebron play basketball or some random person sitting in the stands?. Verbs and Voice. Voice is the form a verb takes to indicate whether the subject of the verb performs or receives the action.

Verbs - . verbs. verbs are a necessary component of all sentences. verbs have two important functions: some verbs put

VERBS - . by: alan s, alex m, and jordyn c. what are verbs?. verb - words that describe a person’s actions. running

Verbs - . verbs show the action of a sentence, or they can also be used to link words together. action verbs. action

Verbs - . click to add subtitle. type 1 date. what is a verb? brainstorm a definition. what’s a verb?. verbs express

Verbs! - . today’s objective: we will identify verbs in a sentence: action verbs linking verbs helping verbs. what is a

Verbs - . ms. lópez march 7th, 2012. what are verbs. the verb is perhaps the most important part of the sentence. a verb

Verbs - . kinds of verbs. a verb is a word that expresses an action or a state of being. action verbs. an action verb is

Verbs - . action verbs. who can tell me what an action verb is? a action verb tells what the subject of a sentence does

Verbs - . just do it. verb defined. a verb is a word that expresses…. an action - joey punched sal in the face. a

Verbs - . verbs. a verb is a word used to express an action or a state of being. examples. actions: running, jumping,

Verbs - . what is a verb?. a verb is a word used to express an action, a condition, or a state of being. the two main