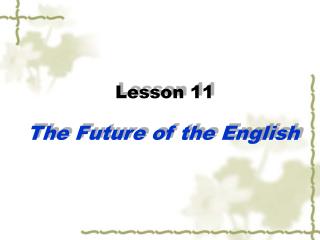 Lesson 11 The Future of the English Pre-Text Questions What is the writing mainly about? What kind of writing is this one? part an exposition and part an argument What are the differences between exposition and argument? How many subcategories can argument fall into? formal and informal

Lesson 11 - . belief in the messengers and prophets. • allah has selected prophets for guiding people in every era and