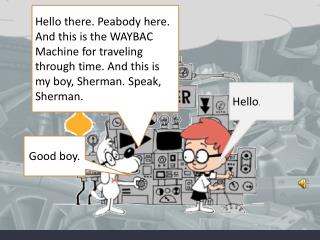 Hello there. Peabody here. And this is the WAYBAC Machine for traveling through time. And this is my boy, Sherman. Speak, Sherman. Hello. Good boy. Where are we going today, Mr. Peabody?. 1987.