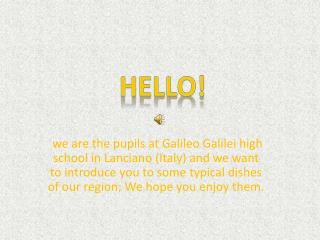 Hello !. we are the pupils at Galileo Galilei high school in Lanciano (Italy) and we want to introduce you to some typical dishes of our region; We hope you enjoy them. Abruzzo cuisine Typical regional food. SAGNE E FAGIOLI. Hello - . about us. customize our teams based on our client ’ s needs history of working with great clients like:

Hello! - . joanne wilson mcim chartered marketer &amp; professional copywriter. marketing tips to get 2013 off to a

Hello! - . i would like to show you mine presentation about computer . theres just photos and names becouse i was talking

Hello! - . who is this guy?. designer at momentum advanced solutions. owner and designer at sultan of beard. graphic

Hello  - Today mrs. sapp and ms. clawson will be teaching together. hello . without talking to anyone , draw a

Hello!!! - . treasurer: charlie garufi. if you paid out of pocket for any phe related activity save your receipt(s) write

Hello! - . you need your reading log and a writing utensil. that all!. narrative info. the total possible points is 50.

hello - . father simon rundell, mission community of the holy family. hello. in the name of the +father, and of the son,

Hello. - Hello. i want a new website. there’s no such thing as a website. fiction non-fiction children’s picture ….

Hello - . ladies, gents, girls, and guys. welcome to our presentation!. before we begin, we ask that you follow the

Hello  - Without talking, open your writer’s notebook and draw a line. develop the. hello . following idea to