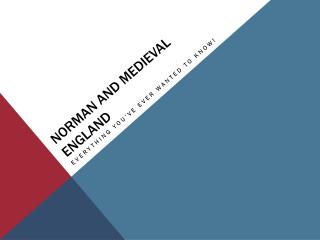 Norman and Medieval England. Everything you’ve ever wanted to know!. Norman England: 1066-1154. King Harold was defeated by William the Conqueror in 1066 at the Battle of Hastings. William – from Normandy, France Significance - first time England was unified. William established….

As you walk in… - . have on your desk… literature book writing utensil. literary map of the british isles. unit one:

William the Conqueror and the Norman Invasion - . origins. william i was born in 1028 in normandy he was the duke of

Medieval History - . please take out a sheet of paper and create cornell notes. if you need an example of cornell notes,

Norman and Medieval England - . everything you’ve ever wanted to know!. norman england: 1066-1154. king harold was