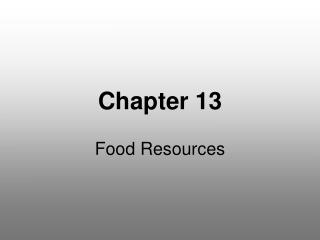 Chapter 13. Food Resources. Food in the World. 30,000 plant species with parts people can eat 15 plants and 8 animals supply 90% of our food Wheat, rice, and corn are half the calories people eat 66% of people eat mainly rice, wheat, and corn (grains)