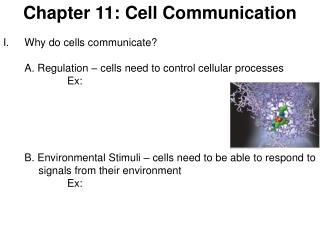 Chapter 11: Cell Communication Why do cells communicate? A. Regulation – cells need to control cellular processes Ex: B. Environmental Stimuli – cells need to be able to respond to signals from their environment Ex:. II . Stages of cell signaling: Hormones and Cell Signaling - . cellular communication. everything an animal does involves communication among cells

Chapter 11 Cell Communication - . question?. how do cells communicate? by “cellular” phones. but seriously, cells do

Anatomy of a cell - . chapter 3. typical cell. cells vary due to function. the typical cell exhibits the most important

Chapter 3 Cells and Tissues - . about cell membranes. all cells have a cell membrane functions : controls what enters and

Chapter 2: Cells and Cell Division - . by the completion of this chapter, you should have an understanding of: the

Cell to Cell Communication - . ap biology chapter 11. objectives. explain why and how cells communicate. explain the

Chapter 3 - . by: bailey . what is cell theory?. cell theory . cells are building blocks for plants and animals cells are

Cell Specialization and Cell Communication - . goal 2.02: investigate and describe the structure and function of cells,

Cells - . chapter 3. cells. the cell theory emerges. modern cell theory all organisms consists of one or more cells each

No cell lives in isolation - . survival depends on an elaborate intercellular communication network that coordinates