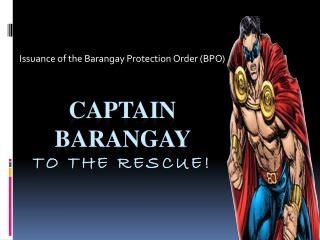 Captain barangay to the rescue! Issuance of the Barangay Protection Order (BPO). Captain barangay to the rescue!. WHAT IS A PROTECTION ORDER?.

Captain barangay to the rescue!

CRIMINAL CONFISCATION Restraining Orders - . the scope of the discretion of the

The rescue - . rescuing a girl. 1998 wuhan flood. rescuing people in the flood. 1.run,drag,pull up 2.held onto a tree

VICTIM SPECIFIC REMEDIES - . what can we do as state prosecutors?. uniform securities act. national conference of

Community Volunteer Police Patrol - . paso robles police department. if you have the time, we have the job for you!.

BRIEF PROFILE OF OUR MUNICIPALITY - Creating local solutions in building resilient communities: the experience of the

To the rescue! - . how can people help animals that are in danger?. say this word to me…. con.

Telephoning - . there are particular expressions usually used in handling telephone. they are :. how to answer the phone