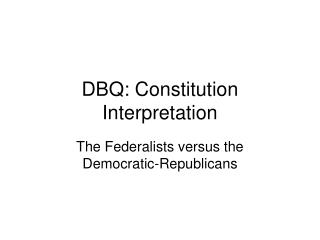 EKG Interpretation - . just the beginning. king county. introduction cardiac monitoring has been routinely used in the

THE CONSTITUTION - . they were mostly wealthy and opposed anarchy. they supported the constitution. federalists. they

Amending the Constitution - . presentation by phil duffy. there are two methods of curing the mischiefs of faction: the