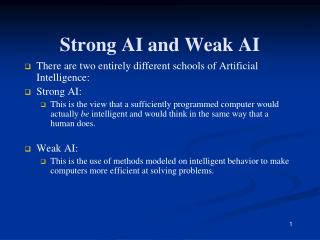 Strong AI and Weak AI. There are two entirely different schools of Artificial Intelligence: Strong AI: This is the view that a sufficiently programmed computer would actually be intelligent and would think in the same way that a human does. Weak AI: Weak AI: Can Machines Act Intelligently? - . some things they can do: computer vision: face recognition from a large set

Strong and Weak Electrolytes - . strong and weak electrolytes. pure water does not conduct electricity because of a lack

Navigation and AI - . mark nelson mjas@itu.dk. movement and behaviors. in general, action in the world some automated,

AI and Games - By lauren argenio russell braun. ai and games. project goals. what ai is the basics of how it works how it

AI and Bioinformatics - . from database mining to the robot scientist. history of bioinformatics. definition of