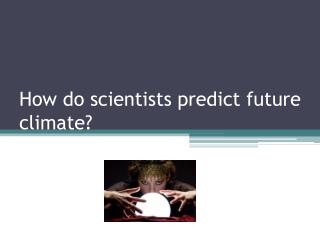 How do scientists predict future climate?

How do scientists predict future climate?

The Physics of Climate Change Prof Tom Choularton - . everybody talks about the weather – but nobody does anything

Chapter 4 The Scientific Consensus on Climate Change: How Do We Know We’re Not Wrong? - . intro . almost all climate

Climate Change What Do Climate Scientists Say? - . is climate change fact or fiction?. the overwhelming majority of

Climate Change: Past, Present and Future - . warm up:. sketch a graph (global temperature vs. time) for the past 20,000

Weather and Climate - . weather and climate. introduction. before the end of june 2011, the national oceanic and