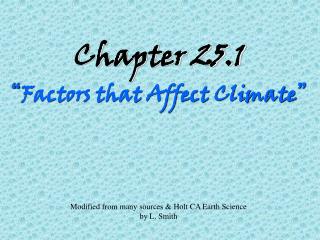 Introduction to Weather and Climate Weather - . contents. why do geographers study the weather? what is the difference

What is Climate? - . climate is…. the long-term characteristic weather of a region. determined by averaging the weather

Title: Factors that Affect Climate - . lesson 5. focus 9/8: copy these definitions in your notebook: climate: the

Climate - . climate. climate is the long term weather trends experienced in a region the two most important elements of

Climate - . with your neighbour come up with a definition for the word climate collect the notes from the front of the

Climate - . by: elew period: 2. climate. the prevailing weather conditions in an area made up off 4 abiotic factors

What is CLIMATE? - . lavender. what are the characteristics of different climates? what factors affect the climate of a

Weather and Climate - . chapter 3. factors affecting climate. weather is the condition of the atmosphere at a given time

The Factors that Affect Climate - . grade nine socials. what affects weather and climate? there are five factors : 1.