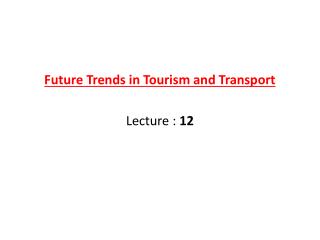 Future Trends in Education - . impacts on what we do and how we do it. how has public education changed in the last 100

Trends and Issues in the Tourism and Hospitality Industry - Contents. social impact of tourismeffects of globalization on

FUTURE TRENDS IN EDUCATION - A lecture/discussion by professor ed frame. future trends in education. “the problem with

Tourism / Transport Relationships (2) Lecture 3 - . demand and supply. what is the process by which people decide to

Trends in English Tourism - . jenny mcgee march 2014. the role of visitengland. advocate for the sector and drives

NEW TRENDS IN TOURISM - . the growth of the tourism industry will be rapid in the 21 st century, with 1 billion