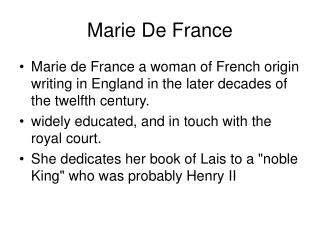 Marie De France. Marie de France a woman of French origin writing in England in the later decades of the twelfth century. widely educated, and in touch with the royal court. She dedicates her book of Lais to a "noble King" who was probably Henry II. Marie De France. Christmas in France - . christmas holiday. the 25th december is a public holiday in france, as it is in britain. however,

Tourism in France - . zoe catherine chung. the most popular destination in the world. tourism: 6% of the country's income

Louis XIII of France (1601-1643) - . background. louis xiii was the oldest son of henry iv louis xiii ascended to the

Louis xvi and marie antoinette notes - . please use pages 14, 15 and 16 in you notebook to copy the following notes.

MARIE ANTOINETTE - . by: mariona vidal and anna membrive. index. live facts biogaphy why is she important her role in the

Marie de France - . formulas for the lais. des lais pensai k’oi aveie (i thought of the lays which i had heard) plusurs