How did democracy develop in Athens? - PowerPoint PPT Presentation 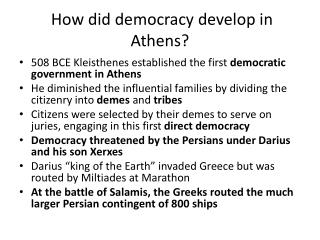 How did democracy develop in Athens?

1 / 14
Download Presentation
How did democracy develop in Athens?
267 Views How did democracy develop in Athens?. 508 BCE Kleisthenes established the first democratic government in Athens He diminished the influential families by dividing the citizenry into demes and tribes

How did democracy develop in Athens?

Athens from Draco to Plato - . note down any questions or comments you have. note down why 5 th century athens remains a

11/12 Focus - Athens is a greek city state that emphasized education. they also are known for starting democracy . do

Athens and Sparta - . brains vs. brawn. athens. a port on the aegean sea a major trade center traded goods such as olive

Democracy in Athens - . do now. take out your vocabulary sheet and persian wars questions. democracy in athens.

Chapter 9 Lesson 1 - . a time of glory in athens. objectives. analyze the roles of athens and sparta in the wars with the

O bjective: To introduce Athens during the Golden Age - . to tour athens during its golden age and create a tour journal

Golden Age of Greece - . athens and pericles. golden age of greece is also called age of pericles had 3 goals strengthen

Trial and Execution of Socrates - . democracy on trial. events in athens. 411 bce : aristocratic reaction; council of 400

LECTURE 2 DEMOCRACY - . 3.1 a democratic world: for the first time in history, most people now live in democracies (p.

Pisistratid and Cleisthenic Athens - . the road to democracy. athens and peloponnesus. typology of polis evolution.

Fight for Democracy &amp; The English Civil War - . canadian democracy. most of the democratic traditions of