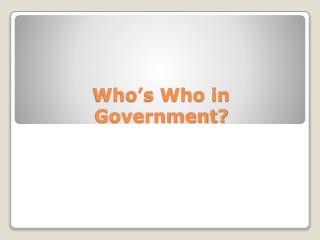 Who’s Who in Government? Who’s Who in Government?. http://www.youtube.com/watch?v=yi1yhp-_x7A&NR=1. Canada is a constitutional Monarchy Monarch of England is Canada’s Head of State In reality holds no power in Canada Currently the Queen for 13 other countries. Travels throughout Canada, but rarely stops in Quebec.

Who’s Who in Government?

LOCAL GOVERNMENT – COUNTY AND CITY - . quick fire. why do you think city and county government might be considered the

Branches of Government - . ss3cg1 the student will explain the importance of the basic principles that provide the

Local Government - . ce.8a. structure of the united states government. what are the units of local government in

Federal and Unitary Systems of Government - . a2 comparative government and politics taylor carey. aims. to compare and