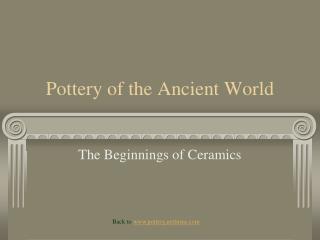 Pottery of the Ancient World

Pottery of the Ancient World

Pottery in ancient Greece - . pottery was made of…. baked clay ….the natural colour of this material was red. there

Ancient Greek Pottery - . what social groups are shown in this vase?. what are they doing in the picture?. image courtesy

Ceramic Pottery - . 7 th grade art &amp; design with mrs. jacobson. what is pottery?. pottery is one of the oldest

The History of Ceramic Pottery - . ceramic

Ancient Greek Pottery - . the importance of pottery. storage containers, cookware and dishes were as necessary for the

Pottery - . spring 2014. what is pottery. functional and decorative artwork such as vases, bowls, pots, and dishes that

Greek A rt and Pottery - . archaic greece. geometric art. in greece’s transition from the dark age into the final

Clay Pottery - . art 1 tcchs 2014. pinch pots. with pinching gestures, you can mold clay into objects such as animals or

Kilns And Pottery By Sarah Padilla - . kilns fire the pottery that you make. kilns have been used by people for hundreds

Ancient Greece - . osamah hindi 7b. intro. ancient greece was a terrific empire that formed our world. however the

Exploring Ancient Ceramics - . coil construction: one of the oldest ways of forming pottery. long strands of clay which