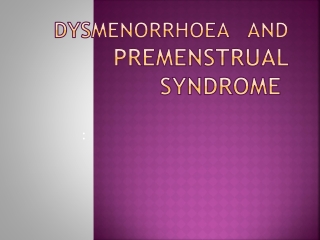 Premenstrual syndrome - Dysmenorrhea might have an effect on more than 50% of menstruating ladies, and its reported

Premenstrual syndrome (PMS) - . prepared by: taghreed al-attar. what is pms ?. pms is a group of physical and emotional

DYSMENORRHOEA - . dysmenorrhea is defined as severe, cramping pain in the lower abdomen that occurs just before or during