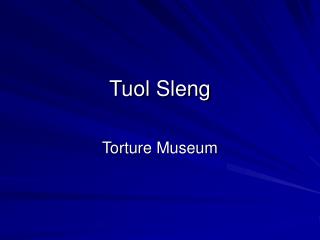 Tuol Sleng Torture Museum Today, S-21 Prison is known as the Tuol Sleng Museum of Genocide. Inside the gates, it looks like any high school; five buildings face a grass courtyard with pull-up bars, green lawns and lawn-bowling pitches

Click below to launch the slideshow: - U :hr2012 staffinghiring team videohiring team

RESEARCH DESIGNS: Choosing and fine-tuning a design for your study - If you are viewing this slideshow within a browser

Vocabulary Slideshow - . slide your desk over adjacent to your partner. match the picture provided with the ch 11

Binding - This presentation is intended to be viewed in slideshow mode. if you are reading this text, you are not in

Finding Out What's Known - If you are viewing this slideshow within a browser window, select file/save as… from the

What should I include in my PowerPoint slideshow? - . include slides that…. tell what role you think each of the

The Audio Slideshow &amp; Photography 101 - . multimedia storytelling spring 2012. what is an audio slideshow? . the

Hafija’s Slideshow of Inspirational Quotes - . how can the world owe you something if you take from it and give nothing

Create a slideshow in window 7 - The purpose of this power point is to show how slideshow is made through the window 7.