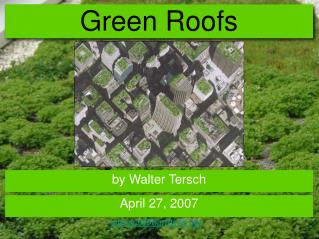 Green Roofs - . by walter tersch. april 27, 2007. wtersch@earthlink.net. preview of presentation:. what is a green roof?

Green Roofs - . by the edgemont environmental club. what are green roofs?. roofs that are either partially or completely

GREEN ROOFs - . alta bailey. what exactly are green roofs?. a green roof system is an extension of the existing roof

GREEN ROOFS - . by: phillip moten. it is a roof of a building that is partially or completely covered with vegetation and

GREEN ROOFS - . what is a green roof? . green roofs are plantings on the roof of a building used in europe for more

Roofs Gone Green - . cooling cities and helping society by roland, abbey, alphy, and elizabeth. evan green. what can i do