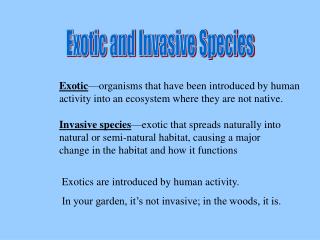 Exotic and Invasive Species Exotic —organisms that have been introduced by human activity into an ecosystem where they are not native. Invasive species —exotic that spreads naturally into natural or semi-natural habitat, causing a major change in the habitat and how it functions

Invasive and Exotic Species - . doyle l. crosswhite geosciences department university of arkansas. what is an invasive

Invasive/Exotic Species - . by: katie kitowski. why did bryn’s dad wash the boat?. lake michigan is full of invasive

Exotic species - . first, a few essential terms… native/indigenous – living naturally in a given area prior to

Invasive Species - . your topic your name and your partner’s name. where did it come from?. picture. where is it

Invasive Species - . by mr. griffin. goal -. i can provide examples of invasive species . ( min. 6) i can explain how

Invasive Species - . non-native species. can you name a species that lives in ontario but is not native to ontario? do