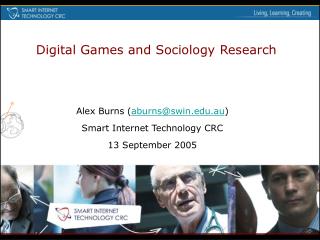 The Olympic Games - . the olympic flag. five rings are joined together as a sign of friendship. the summer olympic games.

Objectives of Unit 2: - . discuss findings/experience of assignment 1: “doing nothing” reflect on the concept of

Sociology I Final Review - . 1. which discipline defines itself as “the systematic study of human society”?.

IF COLEMAN’S BOAT MAKES WATER, WHAT WILL KEEP SOCIOLOGY AFLOAT? PRESENTATION AT THE DEPARTMENT OF SOCIOLOGY OTTO-FRIE

Sociology 371 Criminology - . robert crutchfield. getting started. an event at carnegie mellon university has a crime