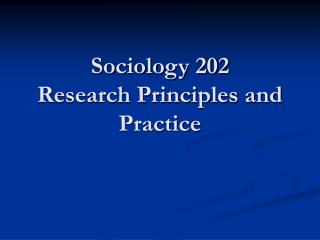 Sociology 202 Research Principles and Practice. Bogardus Social Distance Scale. Let’s say you’re interested in the extent to which non-Muslim Canadian citizens are willing to associate with, say, Muslims. You might ask the following questions: Valuation: Principles and Practice - . 06/02/08 ch. 12. valuation techniques. relative valuation the value of an asset is

Security: Principles and Practice - . question. can you write a self-replicating c program? program that when run,

Research in Sociology - . research methods. factual or empirical questions only ask about the facts of an event and do

Sociology: Research Methods - . common sense and the need for research what everyone knows may not be true move