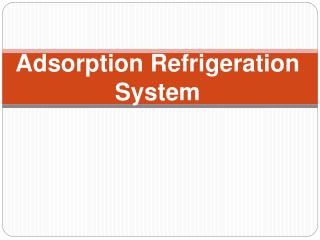 REFRIGERATION FUNDAMENTALS - . hvac/r. soldering &amp; brazing. when and why; when an a/c or refrigeration system is

Adsorption - . what is adsorption?. adsorption is the transfer of a material from one liquid or gaseous state to a

Adsorption on the surface - physisorption and Chemisorption