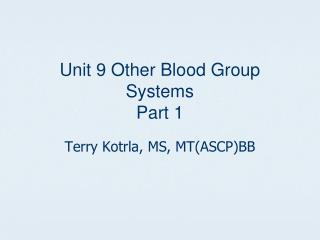 Unit 9 Other Blood Group Systems Part 1. Terry Kotrla, MS, MT(ASCP)BB. Introduction. ISBT recognizes 30 blood group systems with over 600 antigens. Some VERY rare only found in certain ethnic groups. Some associated with diseases or resistance to infection. Most important are ABO and D

Unit 9-1: The Rock Cycle Part 1 - . the rock cycle begins as magma cools and hardens into rock. this type of rock is

Blood – Part 1 - . chapter 10. blood. is the “river of life” that surges within us. transports everything that must

Unit 5: Part 1 - . review game. question 1. a radio station broadcasts a signal over an area with a 75-mile radius. what

Unit 7: Part 1 - . remembering the wars. catastrophe of epic dimensions: wwii. never before had so many fought never

China: Unit 9 Part One - . hannah ibele. before the revolution. 2 groups emerged from divisions: gmd or the national

Other Blood Group Systems - . introduction. for each blood group system you must know : antigen development, if

3B - UNIT 9 - PART 2 - . by lilian marchesoni http:// lilianstoolbox.pbworks.com. comparatives and superlatives. the son