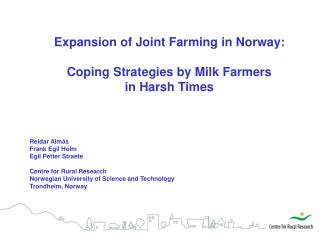 Chapter 4 Coping Processes - . the concept of coping. coping refers to “efforts to master, reduce, or tolerate the

The consequences of expansion - . negative too much new territory would be hard to rule damage to italian farmland forced

Norway - . learning targets. 1. i can find norway on a map. 2. i know what language people speak in norway. 3. i can tell

Subsistence Farming - . world-wide most farmers are subsistence-growing just enough to feed their families. they find

Mmm, Mmm, Milk - . from the cow to the table. how does my milk get here?. where does milk come from?. milk comes from