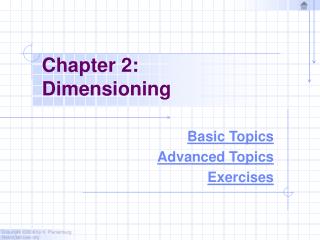 006.00 Demonstrate basic dimensioning techniques - To describe an object completely, a drafter needs to define both the

Geometric Dimensioning and Tolerancing - . chapter 1, introduction. history. during the early period of manufacturing

Types of Lines and Dimensioning a Drawing Standard Grade - . the importance of dimensioning correctly. drawings need to

GEOMETRIC DIMENSIONING AND TOLERANCING (GD&amp;T) - Purpose is to describe the engineering intent of parts and