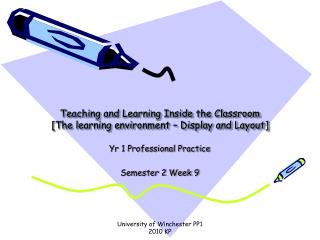 Teaching and Learning Inside the Classroom [The learning environment – Display and Layout]. Yr 1 Professional Practice Semester 2 Week 9. Phil Beadle as The Guardian’s teacher of the year 2005 quoted intellectual Linda Powell:.

Killeeneen N.S - . developing ict as a teaching &amp; learning resource. why use ict in our daily teaching routines?.

Toward Scientific Teaching: Active Learning in the Classroom - . bill wood department of mcd biology and science

Learning Differences: What’s It All About? - Faculty teaching &amp; learning conference 6 may 2011. learning

Learning to Learn: Why Not Be Explicit In The Classroom? Karl Wirth - . changing landscape of teaching &amp;

Teaching and Learning Outside the Classroom - . karen phethean. what?. learning outside the classroom is “the use of

Classroom Management: Creating an Environment for Learning - . objectives:. understand the teacher’s role in creating a

Learning Environment in the Differentiated Classroom - . presented by kathy marks, m.ed. characteristics of an effective

Welcome to the Teaching-Learning Academy - . a community of scholars in dialogue on teaching and learning. overview.

Teaching /Learning / ICT - . in teaching, what are the assumptions made about different forms of learning? teacher,

Teaching, learning and ILT/e-learning - . begin your journey. the learning journey. personal reflections on a practical

Assessment - . what is assessment ?. assessment is the ongoing process of gathering, analysing and reflecting on evidence