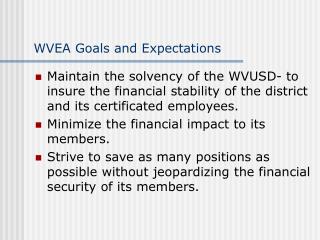 WVEA Goals and Expectations. Maintain the solvency of the WVUSD- to insure the financial stability of the district and its certificated employees. Minimize the financial impact to its members. Goals and Expectations - Write out your personal goals and expectations for this year in a friendly letter. address the

Goals and Expectations Assignment - . this is the first sample i have of your writing. please do the best you can and

INTERNATIONAL EDUCATION – GOALS AND EXPECTATIONS @ FAIRVIEW – KL 14/8/2013 - . how do the goals of an international

Rules and Expectations - Please make sure you signed in with your first and last name, along with your teacher’s name

Needs and expectations - . reflection task. the course would be successful for me if…. sharing in groups. how to fulfil

Expectations and Macroeconomics - . in the long run workers experience no money illusion which means, actual and natural

EXPECTATIONS and PROFICIENCIES - . what faculty want; what you bring. judy m. groff advisory system and program