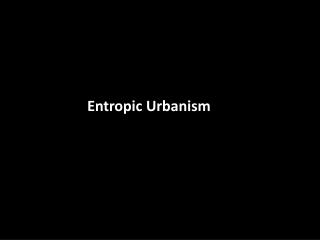 Entropic Urbanism. “The suburb is now merely a place to reach out to the scattered components of social existence. A man works in one place, sleeps in another, shops somewhere else, finds companionship wherever he can, and cares about none of these places” (Oldenburg, 1989). Urbanism - . the importance of the baroque era in our days. . realised by: zinab , hafsa , julita , michael et joana.

Gravity as Entropic Force - . xiao-gang he ntu talk at

Gravity as Entropic Force - . xiao-gang he ntu talk at ustc on april 16 th in collaboration with bo-qiang ma. ?. x.-g.

New Urbanism - . a regional design elena shulman. what is your ideal community?. contents. history of new urbanism a

Urbanism: Southern California - . by: caryn engel. just a thought. ‘human activities over the past fifty years have