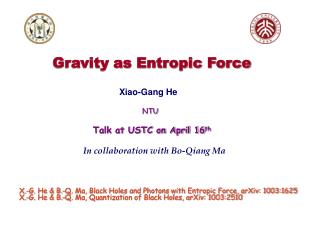 Gravity as Entropic Force - . xiao-gang he ntu talk at

Force and Gravity - . force. force is a push or a pull on an object in a certain direction. forces can cause an object to

Gravity and Balanced Force - . what is friction?. gravity : the force that keeps things from flying off into space.

GRAVITY &amp; GRAVITATIONAL FORCE - . presentd by : miss priti singhal. what is gravity. gravity is a force between

Entropic Urbanism - . “the suburb is now merely a place to reach out to the scattered components of social existence. a

Gravity: A Force of Attraction - . it all starts with an apple…. one beautiful spring day in 1655, a man named

Gravity: A Force of Attraction - . chapter 1, section 4. effects of gravity on matter. why is leaping in space easier

Calculating the Force of Gravity - Aim: what are newton’s three laws, and how do they describe how an object behaves?

Gravity: A Force of Attraction - . chapter 1, section 4 cohick. effects of gravity on matter. why is leaping in space

GRAVITY AS AN EMERGENT FORCE Erik Verlinde University of Amsterdam - Ichep conference, paris , 22/07/10. gravity as an