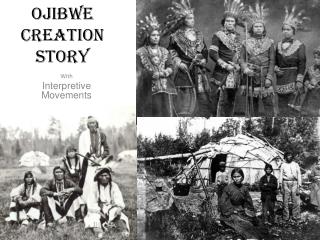 Ojibwe creation story. With Interpretive Movements. (Red, black, white, and yellow t-shirt groups sit on heels in rows, hands on lap.) Long , long ago the Creator who gave life to us all Created the sun, … (arms up and spread wide) the moon, … (arms up, palms together to right side)

The Ojibwa - . the people of the falls. by: annette hynes. background. there are many different spellings/names for the All My Relations - . canada’s indigenous peoples. note:. there are hundred of different aboriginal cultural groups,

Creation Stories - . this story comes from the mossi people. before the colonization of africa, the mossi lived in the

Ojibwa - . by michael and ryan a. . the ojibwa clothing. the ojibwa wore 8 by 4 buck skin. they wore a bandolier bag and

The Creation Story - . by: katie gipson tori hosman. creation myths. inca: humans were made of stone. the children of the

The Creation Story - . genesis 1. genesis creation of the world. http://www.youtube.com/watch?v=_rkbyqf9jsk. the seven

The Creation, Fall, and Long Journey - . world foundations 101. anti quiz. which are elements of, or aspects of,

A CREATION STORY INVOLVING A GOD - The idea of god , creation stories , the idea of heaven and hell nienke moor ariana