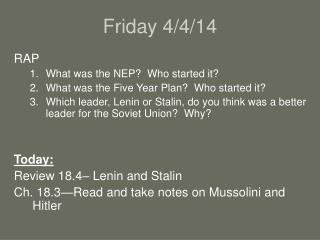 Chapter 16 Acid – Base Equilibria - . end-of-chapter problems: see next page; will answer questions on homework when

Friday, April 20 th - . warm up. devon wants to wrap a present for her sister. the rectangular box has dimensions of 12 x

Conservation Planning Friday 9 March 2007 - . introductions find out about the person next to you: • their name •