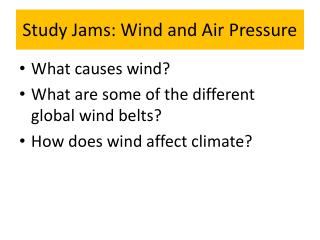 Study Jams: Wind and Air Pressure. What causes wind? What are some of the different global wind belts? How does wind affect climate?. Moving Air. Wind. Wind is the horizontal movement of air from an area of high pressure to an area of lower pressure. How Does Temperature Affect Air Pressure and Wind? - . the earth is surrounded by a layer of air that presses down on the

INTRO - Objective 02/14/2013. describe global wind patterns. intro. what causes the wind to blow? does it always blow in

Wind - . lua and val. wind. wind is the flow of gases on a large scale. on earth, wind consists of the bulk movement of

Wind - . definition a. wind is the horizontal movement of air from an area of high pressure to an area of low

Movement of Air - . wind formation:. wind is caused by the uneven heating of the earth and its atmosphere these

Chapter 8 - . wind and weather. three main concepts in this chapter: movement of air wind monitoring the wind. what

The Circulation of Air in the Troposphere - . wind. wind is the horizontal movement of air parallel to earth’s surface.

Wind Energy - . by emma and mentor karin wadsack. how wind energy works. wind is a type of solar energy. heating by the