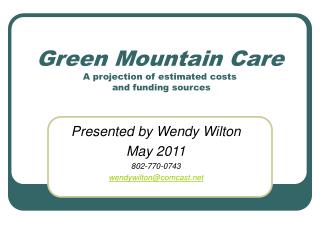 Green Mountain Care A projection of estimated costs and funding sources. Presented by Wendy Wilton May 2011 802-770-0743 wendywilton@comcast.net. What has been discussed and why did I do this work?. Curriculum and Program Development - . the theory. the five most signigicant curriculum events in the twentieth century.

Introduction - . overview. health care in america is fundamentally political like every other issue, health care tends to