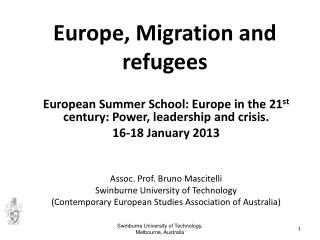 Refugees and asylum-seekers - . a presentation for schools. what is an asylum-seeker?. a person who has fled persecution

Jens Reimann Germany Federal Office for Migration and Refugees bamf.de - Orientation courses as an important part of the

Refugees and Human Rights - . future challenges for australia - australia in its regional and global contexts stage 5