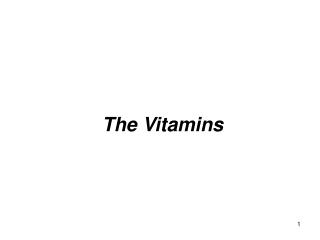 The Vitamins. Vitamins. Organic, essential nutrients required in minute amounts to perform specific functions that promote growth, reproduction, or the maintenance of health and life. Bioavailability. The availability of vitamins from food depends on two factors:

Vitamins and Minerals: What , When and How Much to Supplement - . elin zander , rd, cd, cnsd. learning objectives. the

BAKER’S YEAST PRODUCTION AN OVERVIEW - . a schematic flow diagram for the production of baker’s yeast. chemicals.

The Fat-Soluble Vitamins - . a, d, e, and k. the fat-soluble vitamins. vitamin a and beta-carotene. retinoids and

Vitamins - . helping you to: create a healthy lifestyle! click here to play an interactive game. vitamins. a vitamin is a

Chapter 8 Nutrition Basics: Energy and Nutrients - . coming up in this chapter. learn about the sources of energy in your

Cellular Respiration in the Mitochondria - . eukaryotes use mitochondria to produce the majority of the cell's atp. the