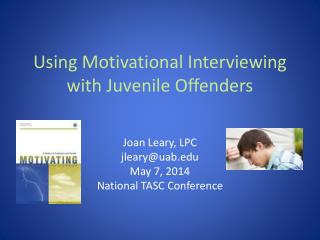 Using Motivational Interviewing with Juvenile Offenders. Joan Leary, LPC jleary@uab.edu May 7, 2014 National TASC Conference. Experts in Audience. YEARS IN FIELD POPULATION I WORK WITH What do I know about MI? 0……………10 Glean from today’s workshop? Juvenile Offenders - . purpose. what is the purpose of the jo system?. differences between the adult and juvenile

Motivational Interviewing - . “a therapeutic style intended to help clinicians work with patients to address the

MOTIVATIONAL INTERVIEWING - . motivation can be defined as a concept used to describe the factors within an individual

MOTIVATIONAL INTERVIEWING - . the art of possibility in conversation: motivational conversations 101 presented by dee-dee

Motivational Interviewing - What health behaviours do we try and change in patients?. medication