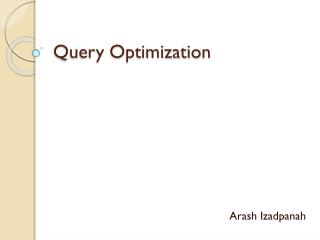 Query Optimization. Arash Izadpanah. Introduction: What is Query Optimization?. Query optimization is the process of selecting the most efficient query-evaluation plan from among the many strategies usually possible for processing a given query , especially if the query is complex .

Fundamentals of Misys Query (Tiger and PM) - . matthew belardi august 2008. agenda. what is misys query ® ? what are the

RDF for Developers - Paul groth. rdf for developers. thanks to eyal oren, stefan schlobach for slides. contents. the web

Structured Query Language - . history of sql. sql stand for structured query language sql is based on the relational