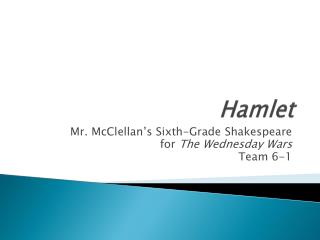 HAMLET Summary - Hamlet is the prince of denmark. his father has recently died. hamlet summary. his uncle, claudius, has

Hamlet - . a final discussion . hamlet is the quintessential revenge play. a. true b. false. when hamlet asks “to be

Hamlet Plan of lectures - . revenge and the ghost just how crazy is hamlet? the theme of mortality meta-theatricality.

Aim: Why does Hamlet plan to feign madness? - . do now: what would you do in hamlet’s position? how difficult do you

HAMLET - Act ii. hamlet. scene 1. ophelia is reporting to her father about hamlet and his general disarray. polonius

Aim: Who is Shakespeare’s Hamlet? - . do now: in hamlet’s famous first line, “a little more than kin, a little less

Hamlet - Excerpt 1 analysis - . par . 1:situate the excerpt in the play; say who is on stage. shortly after the

Ats One Hamlet Noida - Ats one hamlet noida is one of the most desirable projects from ats group launched at sector 104,