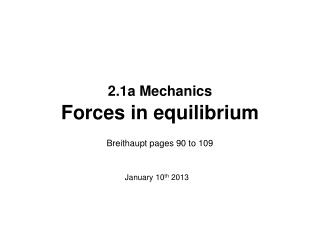 2.1a Mechanics Forces in equilibrium

2.1a Mechanics Forces in equilibrium. Breithaupt pages 90 to 109. January 10 th 2013. AQA AS Specification. Vectors and Scalars. All physical quantities (e.g. speed and force) are described by a magnitude and a unit. VECTORS – also need to have their direction specified

2.1a Mechanics Forces in equilibrium

The Body Systems - . the organ systems of the human body and other vertebrates help to maintain balance and perform a

Force and Motion - . mrs. hicks science 6 th grade. the force that results from two surfaces rubbing against one another.

Newton’s Laws of Motion - . a scientific law is something that will happen in the physical world each and every time

Newton’s Laws of Motion - . 1 st law of motion. inertia. “the old tablecloth trick”. an object will remain at rest

I nertia and Equilibrium of forces - . inertia. galileo, an italian scientist, is considered the father of modern science

Chapter 2 The Mathematics of Wave motion - . 2.1 one-dimensional waves. the essential aspect of a propagating wave is

Summary of the Laws of Motion - . first law : if no net force acts on it, then an object remains at rest or an object in

9.4. Newton’s Second Law for Rotational Motion - . a model airplane on a guideline has a mass m and is flying on a