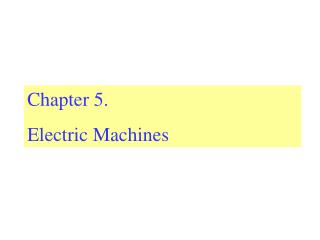 Chapter 5. Electric Machines. 5.1 Introduction. One of energy can be obtained from the other form with the help of converters. Converters that are used to continuously translate electrical input to mechanical output or vice versa are called electric machines . Electric Machines - . in electrical engineering, electric machine is a general term for electric motors and

Chapter 5: Work and Machines - . making work easier for us. section 5.1: work. what is work? list some examples of work:

8. Braking of Electric Machines - . why braking. to stop the electric motor. to sustain the speed of the drive

MACHINES – UNIT 5 - . definition of machine. any device that helps people do work . it does not change the amount of

CHAPTER 8 MACHINES - . machines. machines make work easier by changing the force you exert in size or direction, or both.

5 Coolest Vending Machines - At sun vending, we provide our consumers with a vast selection of coffee, snacks and drinks