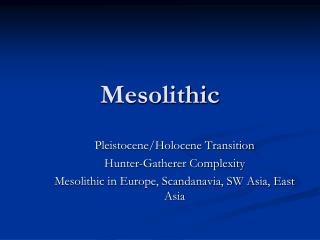 Chapter 5 - . the neolithic revolution: the domestication of plants and animals. chapter outline. the mesolithic roots of

The Mesolithic Period in Europe - . chapter 13. climatic changes in europe in the early postglacial period. around 9,500

How did Mesolithic Humans Differ F rom Their Paleolithic Counterparts? - . and what does death have to do with it?. the

The Paleolithic Era - . (from around 2.5 million years ago to about 10k b.c.e.). paleolithic migration patterns. members